SHOWTIME SPORTS today has released the trailer and key art for its new digital franchise, FIGHT TOWNS WITH STEPHEN JACKSON, where the 2003 NBA champion and co-host of the popular podcast ALL THE SMOKE® takes a deeper dive into the lives of the sport’s most talented boxers to learn their stories inside and outside the ring while unpacking the history, culture and icons that make up the places the athletes call home. Jackson allows fight fans to see a side of the fighters rarely seen. The full episode will be available on Monday, January 2 on the SHOWTIME SPORTS YouTube Channel. 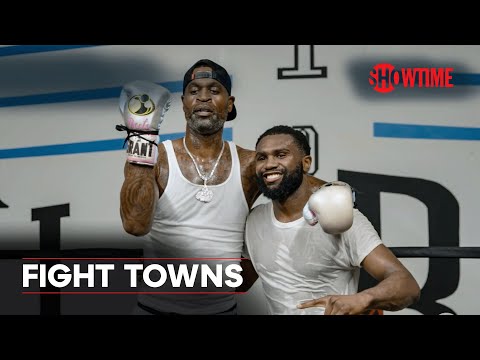 In its first installment, FIGHT TOWNS visits unbeaten rising star Jaron “Boots” Ennis and unified 122-pound champion Stephen Fulton Jr. in their hometown of Philadelphia, Pa., and checks in with former two-division world champion and Philly legend Danny Garcia as he gets ready to enter the ring in Brooklyn.

While in Philadelphia, Jackson, a fight fan who has provided analysis during live SHOWTIME® Boxing weigh-in shows, explores the grit and soul that makes the City of Brotherly Love a cradle of champions. He starts by visiting Bozy’s Dungeon, where Ennis, who competes for the interim IBF strap against Karen Chukhadzhian in the co-main event of Gervonta Davis vs. Héctor Luis García SHOWTIME PPV® on January 7, trains alongside his dad, and hops in the ring for a quick workout. After the session, Jackson samples the fare at one of Boots’ favorite local joints.

Next, Jackson is off to check out Garcia’s DSG Barbershop and gym where he chats with him via FaceTime. Garcia makes it clear that Philadelphia never backs down from supporting its own before heading off to his own fight week events. After a little more training – this time with Fulton – Jackson wraps up with some seafood at CBS Crab Shack, a restaurant owned by Fulton. Over the course of his conversations with the local athletes and the community they help lift up, Jackson learns what it really means to be a boxer from the tough streets of Philadelphia.

FIGHT TOWNS adds to a growing list of unfiltered, unscripted and provocative content on SHOWTIME SPORTS digital platforms including the award-winning video podcasts ALL THE SMOKE and MORNING KOMBAT, KG CERTIFIED and THE LAST STAND.

Showtime Networks Inc. (SNI), a wholly owned subsidiary of Paramount, owns and operates the premium service SHOWTIME®, which features critically acclaimed original series, provocative documentaries, box-office hit films, comedy and music specials and hard-hitting sports. SHOWTIME is available as a stand-alone streaming service across all major streaming devices and Showtime.com, as well as via cable, DBS, telco and streaming video providers. SNI also operates the premium services THE MOVIE CHANNEL™ and FLIX®, as well as on demand versions of all three brands. SNI markets and distributes sports and entertainment events for exhibition to subscribers on a pay-per-view basis through SHOWTIME PPV®. For more information, go to www.SHO.com