Shergold started the stronger, boxing off the back foot with a solid jab. Wilkinson grew into the fight and improved her output as the rounds went on.

The Darlaston fighter came forward as Shergold remained boxing off the backfoot.

Judges scored the contest 98-92 Wilkinson and two 95-95 meaning this one was scored a majority draw.

After two fights on the road, Exeter’s Shannon Willey enjoyed some home comforts as he took on Jamaica’s Karlow Wallace.

It was the appetiser to the main event and boy, what an appetiser.

The pair traded shot after shot for four rounds. Both men gave their all and stood and traded. It was epic stuff.

Rocco was great value as always as he put 31 year-old Rowen through his paces.

The fighting farmer exploded into action against Josh Wale trained Martin Shaw. Smith rocked the Rotherham man in the opener before Shaw used his ring nous to slow the debutant down.

Smith also settled into his rhythm and closed this one out to match Rowen’s shut out 40-36 win.

Exeter’s James Drummond bounced back from a debut defeat back in June to record a victory in his second outing.

The 34 year-old suffered first round KO in Birmingham but credit to Drummond, he was straight back in to take a 39-38 win over Wiltshire’s Paul Cummings.

Whetstone heavyweight Harry Armstrong was back on home turf as he returned to his native Torquay where he splits his time between training.

The 29 year-old moved to 5-2 as he defeated Nottingham Lamah Griggs.

Armstrong, the bigger and heavier man, was made to work for his win as Griggs kept busy throughout trying to close the distance and work on the inside.

It ebbed and flowed but Armstrong got the nod 39-37. 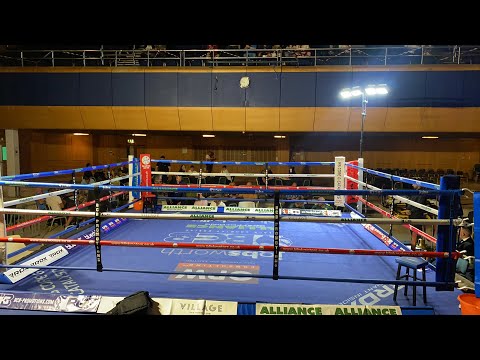 Michael Stephenson wants to become the pride of the Midlands after becoming eligible to box for the area’s super middleweight title.
First comes another outing when BCB Promotions stage their next show at the Park Inn Hotel, in Northampton town centre (Silver Street), when fight night arrives on Friday September 9.
Stephenson was born and raised in Bedford, but now qualifies as Northampton-based after effectively moving there to train out of the town’s Team Shoe Box gym.

English champion Zak Chelli is expected to move up and relinquish the belt, meaning area title holders might well be propelled onto the national stage.

William Webber and Max Lovell are set to contest the Southern area strap, with Stephenson setting his sights on the Midlands alternative, after another run-out.

The 29-year-old missed a July date, due to injury, and undertakes a scheduled eight rounds, for the first time, as the last step before going for honours.

He last stepped through the ropes for competitive combat in May, outpointing Lewis van Poetsch in his maiden six-rounder, through a 59-55 scoreline.

That improved his pro record to six wins and one defeat, all over-the-distance, the sole blip coming against Danny Shannon in 2018.

Stephenson is moving fast despite being relatively short on experience, with just one amateur bout and seven unlicensed affairs before turning pro.

He said: “If I can get active and keep on winning, there are some big fights out there for me and I might even get a title shot by the end of the year.

“I’m pretty much living in Northampton now, what with the time at the gym, so I’m now eligible to box for the Midlands title. It’s vacant and we’ve looked at opponents.

“I’m just waiting to get going again, I’ve already done a six-rounder and this will be another step up for me. I’m 29, but I feel like I’ve got the body of a 21-year-old.

“I didn’t really get out of first gear, over six rounds, and I felt like I controlled the whole fight. My opponent (Lewis van Poetsch) was stronger than I thought, but he didn’t want to engage.

“He had a go, in the first round, but I caught him with an uppercut and I kept on changing the angles that I was throwing my punches from. I was pleased with the performance.

“I’m not playing around, I want to take opportunities when they come and I’ll be ready when that happens. I believe that I can compete at a high level. I’ve only ever lost once, ever.

“Hopefully, I’ll get this one out of the way and I could do with a knockout. That is the sort of statement that would be good to make.”