Eddy Reynoso says Julio Cesar Martinez will aim to unify the Flyweight division before moving to Super-Flyweight for blockbuster bouts against the likes of Juan Francisco Estrada and Roman’ Chocolatito’ Gonzalez. Martinez’s trainer Eddy Reynoso maps out Martinez’s path on this weekend’s episode of ‘Peleamundo.’

Reynoso, the co-trainer and manager of Martinez who is co-promoted by Eddie Hearn’s Matchroom Boxing USA and Canelo Promotions, shares the excitement around the WBC’s ruler at 112lbs that has spread around the boxing world as his power and all-action style 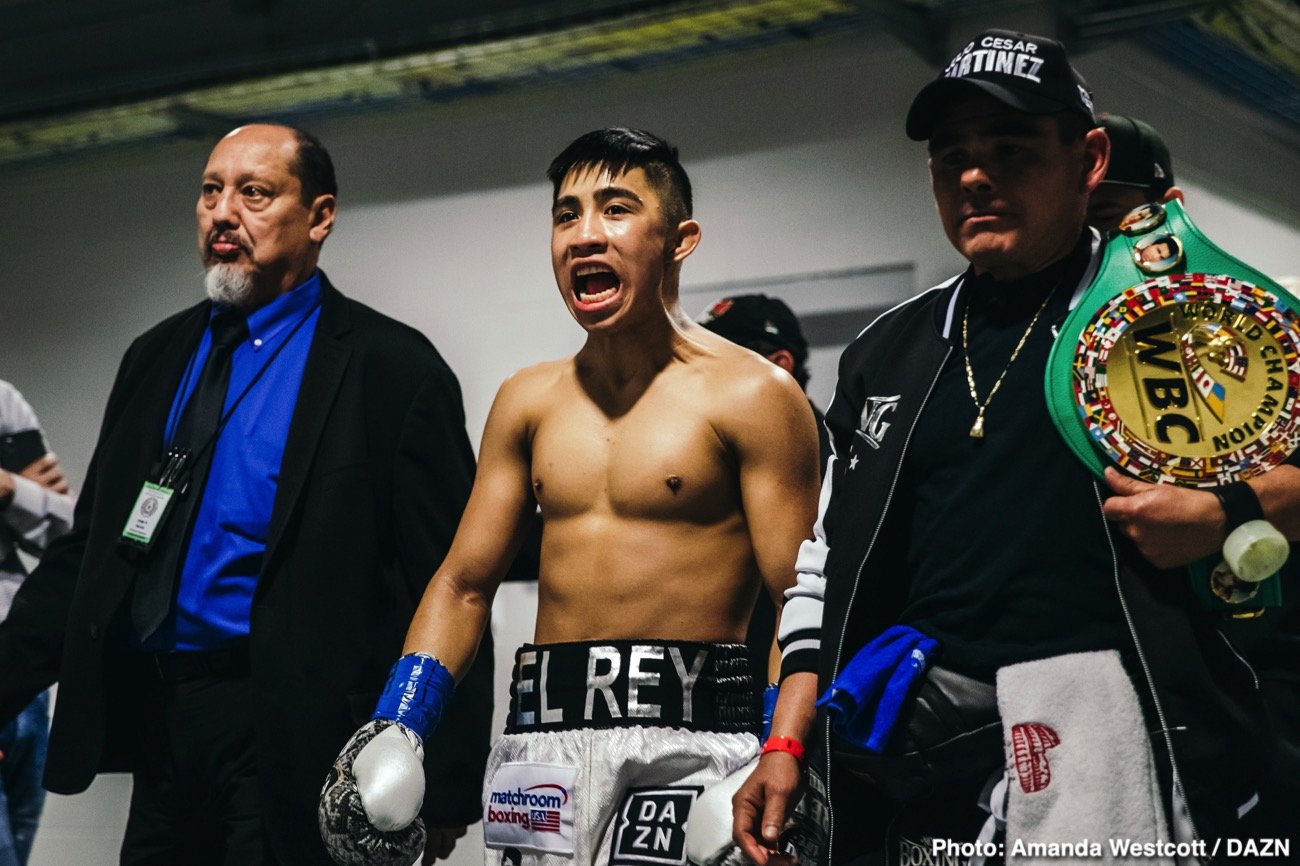 Martinez coming off a win over Jay Harris

The 25-year-old defended his crown for the first time in a thrilling clash with brave Welsh challenger and then-unbeaten European champion Jay Harris in Texas in February, hot off the heels from landing the belt with a ferocious tear-up in Phoenix with former champion Cristofer Rosales.

IBF champion Moruti Mthalane and WBO ruler Kosei Tanaka are top of Reynoso’s hitlist for Martinez at Flyweight before he moves up to 115lbs where mega fights with Estrada and Chocolatito could be on the horizon. While he says his charge is still a work in progress, Reynoso says ‘El Rey’ has all the ingredients in and out of the ring to rule for a long time.

“He’s very disciplined,” said Reynoso. “And he shows all the characteristics of a typical Mexican fighter. He likes to fight. He wants to train and more than anything, he’s a star. In such few fights, he’s already won a World Championship, and I believe if he keeps on the same path, he’s going to do great things because he’s a good fighter who’s very fond of learning, he’s very technical. He’s there. And he’s a grand champion.

“He’s charismatic; he’s brave, he’s a powerful fighter for the division. He has lots of endurance. And he’s not scared. Whatever fight you put him in, he’ll fight. He’s different than the other fighters. And he has a few things to learn, but we’re going to vary the training to get him more technically sound fight by fight.

“He’s always laughing and smiling. And he turns the fights into like a circus. He’s very positive. You never see him angry. He’s a very hard-working, smiling, laughing, a real fighter.

Martinez to face Tanaka or Mthalane next

“We’re going to keep him at Flyweight and try to defend and unify with Tanaka or Mthalane. And we’re getting harder fights little by little. We’ll move up to 115lbs to fight Estrada, Cuadras, Chocolatito, there are so many good fighters, and I believe it’s step by step. We’ll keep him at Featherweight then move up to Super Featherweight.”

Martinez joins Reynoso in the second episode of ‘Peleamundo,’ presented by former two-weight World champion Jessie Vargas, and amateur sensation Marc Castro also stars in the show as he prepares to start life in the paid ranks when boxing returns.