Boxing superstar Mike Tyson spoke to Piers Morgan Uncensored on tonight’s show, confessing his wife and the pandemic had changed him and he laughed with Piers Morgan about falling asleep during his last interview with him.

Speaking from New York, where the show is being recorded this week, Piers asked the former heavyweight champion about his infamous ear bite and whether he will vote for Trump if he runs again. 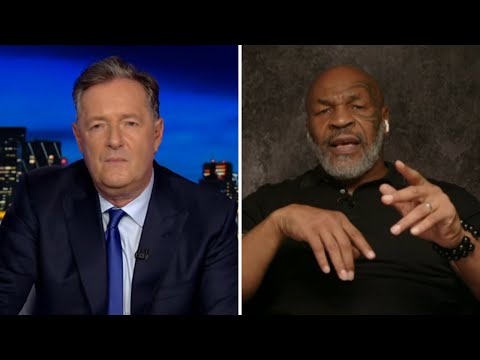 The boxing legend went on to open up about his recent incident on a plane with a rude fan and also how he “flourished” during the pandemic. He said he was now proud of himself and he had been “a scared little boy for a long time” who was vicious and mean.

On falling asleep during an interview with Piers on Good Morning Britain, he explained: “I had hurt myself at that particular time. I guess I was training… I received some painkillers from my wife and after I received these painkillers, I was just incapable of articulating anything.”

Piers added: “People thought I was so boring as an interviewer, I had literally driven you to sleep!”

He replied: “It was my fault everybody.” Later he added: “Please forgive me. Me and my wife were viewing it and I was so ashamed.”

On his health at the moment, following recent wheelchair images, he said:

“[My health] It’s splendid right now. I’ve been training every day, I’ve been working out. I’ve been watching what I’m eating. I feel wonderful.

On events in Ukraine and the Klitschko brothers, who have joined the fight for their country, he added:

“I have a great deal of respect for those two fighters. They are champions and they fight and they won’t give up… there shouldn’t be a war in Ukraine.”

Despite turbulence in American politics, he said he was optimistic about the future of his home country, saying:

“I think everybody should just work together… By trusting and loving one another. Look how far we came since the 80s… I’m really positive about this country and where we are going in the future. It’s the country of my home, I believe in it and I believe it’s going to really flourish once this pandemic is truly over.”

He continued: “I am very happy and I am very proud of myself. I never understood my accomplishments as a human being, until last year perhaps. I never took myself serious and last year I tried and it turned out really well… I was a scared little boy for a long time and that scary little boy was really vicious and mean and scared.”

Asked about how he has found peace, he replied: “My family, that’s my greatest accomplishment… The whole thing, man.”

Quizzed about how he spends his days, he explained he works out for two or three hours and eats a mostly “plant based” breakfast.

Piers added he found Mike a complex human being with a huge heart, adding: “I don’t think I’ve seen many people who have evolved as a human being more than you have given the tough upbringing you had to where you have come to today.”

Tyson said: “The greatest talent that God gives you, he gives you a lot of flaws to go with it as well… In order to succeed you have to be flawed. To have to experience some kind of shame in their lives, that won’t allow them to be in a position that they believe is overwhelming to them psychologically and emotionally and physically…A human being his greatest ability, is his ability to love.”

On the recent incident on a plane, he told Piers:

“First of all, I came from this place called Hippy Hill, 60,000 people were there smoking cannabis. So by the time I’m on the plane, I’m hungry, high and tired ok. And this guy keeps antagonising me. And then I came to my senses and kicked his f***king ass. I’m only joking. I wish I did kick his ass. My bodyguard jumped on top of him.”

He added that out of ten people I might get one trying to antagonise him. Tyson admitted: “[There are] quite a few but I’ve only had to put my hands on one. Listen, I can’t play like that anymore or my wife gets mad. She doesn’t like my sense of humour. She thinks I’m going to get cancelled or some s**t.”

Asked if his wife keeps him out of trouble, he replied: “I think she thinks she keeps me out of trouble. I’m always with her, so that’s why I’m not in trouble.”

On whether more people would get a slap from him, if she wasn’t there, he added: “No, I don’t believe in that. My wife always says to be nice when I go outside, so I would take that advice and be nice.”

On the secret to ‘true love’, he retorted with a smile: “bad memory” but he added he was a “big time” romantic.

Asked how he showed his love, he laughed: “I buy her a house. I’m busting chops. I help her as a parent and we co-parent our kids, simultaneously every day.”

On the values he tries to teach his children, he says: “Never give up… it’s a long life of puzzles that need to be solved. And without that competition spirit, people are not going to do well. They have to know about competition and I train them not to give in with the slightest struggle.”

Piers then quoted his favourite part of Rocky when the on-screen says life is tough but it’s not about how hard you can hit but about how hard you can get hit and still get up again. He replied: “Yes 100%, one small difference that when life hits me, I am going to hit life back!” He concluded: “I am just who I am. I’m just me.”

On the infamous ear bite and what happened to the torn ear itself, he said: “I agree [it’s a long time]… I spat it out… I don’t know, I think they picked it up. I don’t know. I gave it to him in a commercial.”

He continued: “Hey listen, that’s the new gimmick picture, everytime kids, ladies, elederly men ‘will you bite my ear’ and I’m happy to do it.”

On whether he would back Donald Trump is he ran again, he said: “I’m going to do what I want to do, when he runs again. It’s nobody’s f**king business. It’s nobody’s business what I say.”

He said the reaction to him expressing a view on politics was “ridiculous”, adding: “Is this fascist? If the government doesn’t like you, the corporate world doesn’t like you… he can’t work for my company any more…”

Also on the show, Fox News star Tucker Carlson spoke about censorship and whether Donald Trump would be running again. He also talked about Meghan Markle asking Brits, “how did you fall for that… She wants to destroy things she didn’t build”. He says he watched with shock as Piers Morgan was fired for calling her out adding, “the whole thing was insane”

Piers Morgan Uncensored on TalkTV. Find TalkTV on Sky 526, Virgin Media 606, Freeview 237, Freesat 217 and Sky Glass 508, live and on demand on the TalkTV app, streaming services and at Talk.TV.