SHOWTIME SPORTS has released an emotional video feature in which Omar Figueroa Jr. opens up about his mental health issues and reveals the inspiration behind his decision to seek professional help. The full interview, conducted by Brian Custer, can be found HERE. His emotional awakening serves as a backdrop when the former 135-pound world champion and current super lightweight contender faces former world champion Sergey Lipinets in a WBC Super Lightweight Title Eliminator live on SHOWTIME (8 p.m. ET/5 p.m. PT) this Saturday, August 20 from Hard Rock Live at Seminole Hard Rock Hotel & Casino in Hollywood, Fla., in a Premier Boxing Champions Event. Figueroa’s initial opponent, Adrien Broner, withdrew from the main event to address mental health issues of his own.

To watch and share the Figueroa feature which is produced by Marc Youngblood and Jesse Cook and edited by Cook, go to: 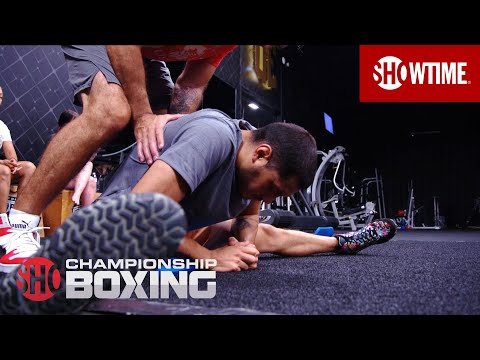 In the video feature, Figueroa reveals that superstar gymnast Simone Biles’ decision to prioritize her mental health during the 2020 Olympic Games inspired him to do the same following a disappointing loss to Abel Ramos his last time out in May 2021.

“The fact that she pulled out of the Olympics – that lit a fire under my a**, and it got me thinking, ‘Man, if she had the guts to pull out and to take care of herself, if she’s pulling out of the competition when she’s one of the faces of the Olympics?’ That’s what kind of started me on this journey,” says the 32-year-old Figueroa, who discloses that he sought professional treatment.

Figueroa hopes that by being public and open about his mental health struggles, he can inspire others the same way that Biles inspired him.

“It’s been a struggle. I’m not saying it’s easy. It’s a constant struggle. After knowing everything that I was dealing with, I feel like I have nothing to prove to anyone. I feel like, now, I’m in control. It’s honestly been the best thing that has happened to me. I’ve had a lot of people that have already reached out to me and thanked me for being open about it. A lot of people have told me that I’ve saved them from suicide … That gives me chills because I’ve been there myself too.”

The video feature will air on Saturday night’s SHOWTIME CHAMPIONSHIP BOXING telecast that also features top 140-pounders Alberto Puello and Batyr Akhmedov squaring off for the vacant WBA Super Lightweight World Championship in the co-main event and WBA Super Featherweight World Champion Roger Gutierrez defending his title against unbeaten Hector Garcia. In the telecast opener, Brandun Lee, one of the sport’s most exciting prospects and biggest punchers, will take on Will Madera in a 10-round super lightweight bout to open a loaded four-fight telecast. To watch, share and embed a clip produced and edited by Jackson Salisbury showcasing Lee’s one-punch power, go to: https://youtu.be/gwSBXtiSLq0.