Luis Alberto “Venado” Lopez revealed that during the tenth round of his fight against Josh Warrington, he considered quitting and taking a dive, frustrated by the dirty tactics of his opponent. 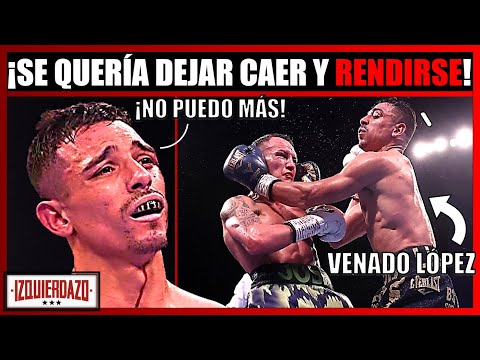 “Many people don’t know, but that night I was feeling that I couldn’t fight anymore”, Lopez told IZQUIERDAZO. “My legs were not responding, I was having cramps. I was hurt, my body was not responding. Just imagine being hit with rabbit punches all night”.

It was in round 10, where Lopez considered quitting.

“I was telling myself, ‘he won’t stop until he kills me’”, Lopez said. “So, in round 10 I considered taking a dive (to surrender the fight)”.

Lopez said that it was his own preparation and the support of his corner, which kept him in the fight.

“We had an excellent preparation”, Lopez said. “God gave me strength to keep going forward and in the end we did the job”.

When he arrived at his corner, Lopez received support and encouragement from his team.

“Mi coach told me that I was crazy (for considering taking a dive)”, Lopez said. “He told me that they couldn’t take away our opportunity, that I was winning, to keep going, to take care, and that God was by my side. So I kept going, God gave me strength to continue fighting, and we saw what happened at the end of the fight”.

Luis Alberto Lopez accepts that he watched the fight again but he had an ugly feeling.

“I have watched it again, but to be honest, I feel very tense when I do it”, Lope said. “Because I feel upset about all the injustices that happened there. So many rabbit punches that he couldn’t let me fight. Headbutts, hugs, I couldn’t throw punches, and nothing happened. I’m just grateful with God for letting me finish the fight in good health

Josh Warrington tried to defend himself from Lopez’ accusations, but Luis Alberto is adamant that its not only him who complains about Warrington’s tactics.

“It’s not only, I wish it was only me, but all the people are saying that”, Lopez said. “So, it’s not only me. He needs to understand that he has a dirty style, he did many illegal things. All the people witnessed that fraud. I’m not saying it, the entire world is saying it”.

Warrington has said that he wants to become the mandatory opponent, and fight again with Lopez. But Luis Alberto insists that Josh is a dirty fighter, and he won’t give him a rematch under any circumstance.