THE BRITISH TITLE fighters for Saturday night’s double-header in Telford met this afternoon to face the media in the final press conference ahead of the show, which will be screened live on BT Sport 1.

At the top of the bill, Telford local Liam Davies takes on the champion Marc Leach for the super bantamweight belt, while at super flyweight, Ijaz Ahmed and Kaisy Khademi will meet for a third time.

The action from the Telford International Centre will be followed by a switch to Miami, where Daniel Dubois will bid to win the WBA world heavyweight championship at the expense of the champion, Trevor Bryan. 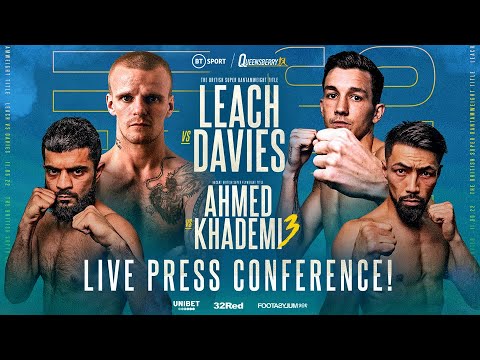 Key quotes from the Telford headliners below:

Liam Davies
“I am super-excited, it is in my hometown and everything is there for me to pick up. So I am looking forward to the fight, I have trained hard and it is going to be a packed arena with loads of my fans there. Let’s go, I am ready to go now and counting down the time to pick the British title up. It has always been my dream to pick it up but, now I am here, it is not enough. I want to win this title and keep moving up. It is a nice belt and the best one of my collection. It will be a tough challenge, I know Marc is a good boxer so I have trained hard and I know in my head it will only bring the best out in me. The tougher the challenge I will rise to it.

“Calling him Salford-chenko is his coaches building him up and my job on Saturday is to knock that confidence out of him. From the first bell, that is what I will be doing. He has done well, to be British champion is a good achievement and I respect that, but my time is now and it is going to take more than one man, no matter what he does, to stop me getting what I want.

“It is my biggest fight to date on paper and I am ready for it.”

Marc Leach
“I am very confident and it doesn’t matter to me if I am the underdog or not, as long as I put the hours and the graft in to make sure I am fully fit. Then I will come away with that victory. It is a big confidence boost the way my coaches speak about me and people need that. Every day in the gym they are constantly building my confidence to bring the best out in me. Come fight night I will show everyone what more I have learned and come away with the victory again.

“I just turned up, make sure I am fully fit and, whoever is in that ring, I come out victorious, no matter who it is. These unbeaten prospects, some of them have easy fights, while I have been around the block and seen it all. It is satisfying to take an 0 away.

“He is good, talented and tall, but I have got the answers and on Saturday night I will show you that.”

Kaisy Khademi
“I want to thank Frank Warren and BT Sport for making this trilogy happen. We have had a great two fights, which were very entertaining and why the third fight is happening. Come Saturday, it will be another war and another great, entertaining fight for the fans. I am very confident in taking the belt, we’ve got a great plan and I have been very focused for this camp. The belt suits me and I like gold! I am not taking anything away from him, but obviously I am focused to get the win on Saturday. I am going to get that win.”

Ijaz Ahmed
“I definitely feel I won both fights and I was very disappointed in that decision being given as a draw last time. This time it is going to be easier to give a decision towards me because I will get the victory. I believe I defeated him the last time, but sometimes it is just not meant to be, but hopefully it will this time. I actually did bust him up last time and my hands were so swollen that I couldn’t see my knuckles after the amount of times I caught him with clean shots. Hopefully this time he won’t get up from one of those shots. We have seen the best of Kaisy Khademi in the last fights, he came at me in the first round, doing this macho business, then only lasted about half the round. Then he was on the back foot running away. You’ve got to look to the future sometimes and, once I’ve defeated Kaisy on Saturday, I will call out Prince Patel again and we will get that fight on.”

There are some tickets remaining for the show at Telford International Centre on Saturday, 11 June available from Ticketmaster.co.uk.

WATCH the British title double from Telford followed by Trevor Bryan vs Daniel Dubois on Saturday from 7pm live on BT Sport 1.

LIAM DAVIES WILL challenge new champion Marc Leach for the British super bantamweight title on a big night of title action at the Telford International Arena on Saturday June 11, live on BT Sport.

In the other half of a British title double header, Birmingham’s Ijaz Ahmed and London’s Kaisy Khademi will go at it for a third time with the vacant super flyweight belt at stake and a final eliminator for a shot at the Commonwealth championship.

And in a fight where prospects put it all on the line, the unbeaten super lightweight Eithan James (8-0) from Northampton goes up against Connor Parker (13-1, 1 KO), Zach Parker’s cousin from Woodville in Derbyshire, in an eliminator for the English title. The Telford card also marks the return of former World Amateur champion Willy Hutchinson (13-1, 9 KOs) at light heavyweight following his unsuccessful tilt at the British super middleweight title against Lennox Clarke in March of last year.

There are some tickets remaining for the show at Telford International Centre on Saturday, 11 June available from Ticketmaster.co.uk.

WATCH the British title double from Telford followed by Trevor Bryan vs Daniel Dubois on Saturday from 7pm live on BT Sport 1.