Julio Cesar Martinez will defend his WBC World Flyweight title against McWilliams Arroyo as the chief support to Canelo Alvarez’s defense of his WBC, WBA Super, and Ring Magazine World Super-Middleweight titles on Saturday, February 27, at the Hard Rock Stadium in Miami Gardens, Florida, live worldwide on DAZN (except Mexico).

TICKETS GO ON PRE-SALE TODAY (TUESDAY JAN. 26) FROM 2 PM ET VIA TICKETMASTER AND ON GENERAL SALE FROM 2 PM ET ON WEDNESDAY JAN. 27 – TICKETS START AT $55 (PLUS FEES) – FANS CAN VISIT WWW.HARDROCKSTADIUM.COM/BOXING FOR MORE DETAILS

Martinez (17-1 13 KOs) puts his title on the line for the third time since landing the belt in December 2019 in a thrilling stoppage win over Cristofer Rosales, outpointing Jay Harris in Dallas in February and blasting away Moises Calleros in two rounds in Mexico City in October.

The all-action Mexican is raring to finally face his mandatory challenger Arroyo after having to pull out of a proposed clash with the Puerto Rican through illness in August.

It is a huge night for the all-action champion, who turns 26 on Wednesday, as he finally gets to fight as the chief support to his stablemate Alvarez, whom he also shares a trainer and manager in Eddy Reynoso after illness ruled him out of fighting on his card in December in San Antonio. 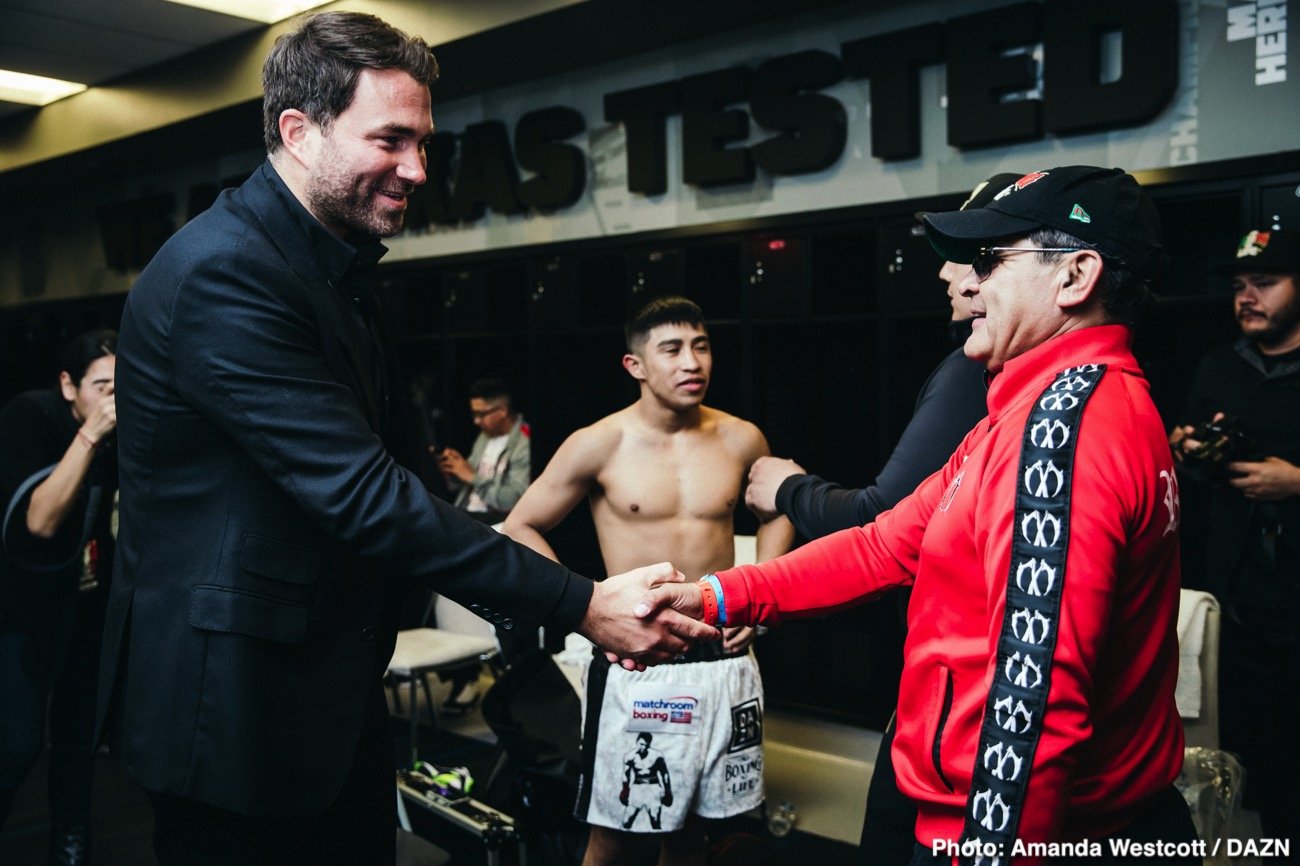 “I am so happy to be back in the ring again, and I promise you a war with Arroyo in Miami,” said Martinez. “With the unification fights ahead of me, it is important to take care of my mandatory challengers, and I expect a tough fight with Arroyo. I believe that 2021 will see me unify the division and become undisputed, and I can’t wait to put a smile back on boxing fans’ faces.”

Canelo vs Yildirim confirmed as “Fight for Peace”

Arroyo (20-4 15 KOs) has been ready to pounce on his shot at the title and win a World strap at the third time of asking. The decorated Puerto Rican amateur was edged out via split decision by IBF champion Amnat Ruenroeng in September 2014 and then fell to pound-for-pound star Roman ‘Chocolatito’ Gonzalez in April 2016 for the WBC and Ring Magazine crowns in California.

The 34-year-old ranked at number one in the WBC enters the bout on the back of three wins in 2019, having returned to Flyweight from a brief stint at Super-Fly, and the former World Amateur Champion is determined to end the talented Mexican’s reign in Miami.

“Finally, the fight is near, and I am sure the fans will enjoy another classic between Mexico and Puerto Rico,” said Arroyo.

NEWS:   Yildirim will use his Golovkin-like tactics to defeat Canelo

“This will be another great classic between Puerto Rico and Mexico,” said Arroyo’s co-promoter, Miguel Cotto. “I am sure they will provide the fans a great fight, and McWilliams will be prepared to rip that title away and bring it back to Puerto Rico.”

Zhang (22-0 17 KOs) is back in the sunshine state after stopping Devin Vargas in four rounds in their clash in Hollywood, Fl. in November, and the 37-year-old giant will look to take another step towards securing a huge fight in the glamour division with a victory over Forrest (26-4 20 KOs), who took Carlos Takam the distance in his last outing in July.

“I’m very excited about this fight,” said Zhang. “February 27 is the highest-profile card of the first quarter of 2021, and it will be an honor to be part of it. I can’t wait to get in the ring and wish the best of luck to my opponent Jerry Forrest. I am training full force. I will be ready.”

“Zhang is a good fighter with great size and technique, but I’ll be ready for this fight,” said Forrest. “2021 is a new beginning for me. Covid has made training difficult, with many gyms shut down, but I’ve stayed in shape since my last fight. I’m now up at my manager’s gym in Ashburn, Virginia, and my trainers have been creating a game plan while bringing in sparring partners to match Zhang’s size and style. I’m excited about this opportunity and am looking forward to ending Zhang’s unbeaten streak.”

A host of young talents get the chance to shine on the card, led by Diego Pacheco. The rangy teen has raced to 10-0 with eight wins inside the distance, and the Super-Middleweight sensation will look to add another impressive win when he takes on Rodolfo Gomez Jr (14-4-1 10KOs) over eight rounds.

“I am more than ready to fight on this amazing card and show what I been working on aside from the time I spent away,” said Espino. “it was a frustrating time for me at the end of 2020, but I am itching to finally show how much work I have been putting into this since I haven’t been in the ring due to recent cancellations.”

Foster Decisions Smith in Clash of Undefeated Featherweights in Philadelphia

Former amateur sensation Marc Castro got his pro career off to the perfect start on Canelo’s undercard in San Antonio with a KO win. The Fresno star goes again in Miami against Lester Brown (4-2-3 1 KO).

“I am ready to get back in the ring, and I want to thank God and my team for making it possible to be a part of the pound-for-pound king Canelo’s undercard once again,” said Castro.

Another successful amateur making his second appearance in the paid ranks is Miami’s own Aaron Aponte. The 19-year-old won via stoppage on debut in October, and Aponte will showcase his talents on a huge platform in his hometown.

“I’m super excited to be fighting at the Hard Rock Stadium on February 27 on the undercard of boxing superstar Canelo Alvarez,” said Aponte. “It’s an honor to fight on such a massive event in my hometown, and I’m very grateful to Matchroom and DAZN along with my manager Peter Kahn and the Fight Game Advisors Team for this opportunity. Stay tuned for the rise of Aaron ‘Alien King’ Aponte!!”

“This is a stacked undercard in support of the pound-for-pound king,” said promoter Eddie Hearn. “Julio Cesar Martinez is fast becoming a must-see attraction in the sport, and an impressive win here will take him to another level – but McWilliams Arroyo is up for the challenge and is a dangerman.

“Zhilei Zhang can stake his claim for a massive fight at Heavyweight later in the year with victory over Jerry Forrest, and it is fantastic for the young talents on the card to be able to perform on this huge stage.”