Courtesy of Be The Match®/SHOWTIME 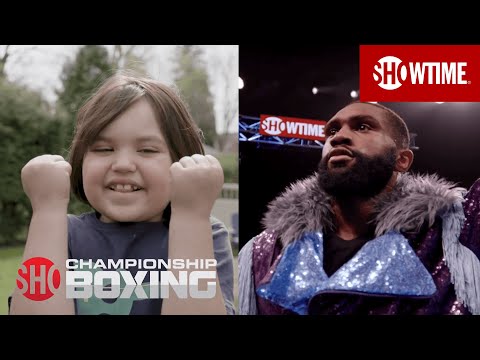 The Philadelphia native, Ennis, learned about Jax’s fight with IPEX syndrome, which can be cured by a bone marrow transplant, after reading an article in the Philadelphia Inquirer earlier this year and decided to get in touch with Jax’s family in Pittsburgh, Pa. to join their quest to find a bone marrow match. Jax, whose mother is Caucasian and father is of Mexican descent, has not been able to find a matching donor, due in large part to the low percentage of Mexican-American donors – and Latino donors in general – on the Be The Match registry. With his fight this weekend taking place in Los Angeles, one of the largest Mexican-American population centers in the United States, Boots is dedicating his fight to Jax and has made it his mission to help raise awareness about how easy it is to register as a potential donor, hoping to grow the registry and help Jax find his match.

“We are both definitely fighting,” said Ennis after a video call with Jax. “I’m fighting in the ring and he’s fighting in a whole different way. At the end of the day, he’s a little kid and he’s going through a lot. I feel he needs someone [to inspire him and cheer him up].”

Inspired by the fortitude of this young fan who relentlessly fights for a chance to grow up healthy, Ennis demonstrated how a simple cheek swab is all it takes to join the Be The Match Registry at his gym during an interview last week. The swab sample is typed and added to a worldwide registry that is searched anytime a patient needs a matching donor. Boots and the Ramirez family have made it their goal to grow the registry’s percentage of donors of color to not just find a match for Jax, but for other children in his situation as well.

“He’s drawn to Boots,” says Missy Ramirez, Jax’s mom. “Because I think he understands what fighting is like, because Jax fights every single day.”

The feature will air on Saturday’s SHOWTIME CHAMPIONSHIP BOXING telecast headlined by unified WBC, WBA and IBF World Champion Jermell Charlo and WBO World Champion Brian Castaño in a rematch of one of 2021’s most significant fights as they again seek to become the first ever undisputed 154-pound male champion in the four-belt era. The SHOWTIME tripleheader also features unbeaten Mexican contender Kevin González facing Puerto Rico’s Emanuel Rivera in a 10-round super bantamweight attraction.