The fight took place at San Joaquin County Fairgrounds in Stockton, California and headlined a card that was streamed live in English on FightHype and in Spanish via TV Boxeo.

Sosa was quicker, stronger and more effective with his combinations throughout fight. The native of Mexico City, Mexico who lives in Tijuana and represents both cities won with scores of 98-92, 97-93 and 97-93.

“I knew that Ronald Cruz would be very strong,” said Damian Sosa. “I knew he was going to come after me. But I appreciate him because you can’t have a fight without an opponent, and I feel he was a great challenge. It was a tough fight, but I had the boxing skills to win round by round and come out with the victory.”

Hector Madera (10-0, 6 KOs) of Stockton, California scored a four-round technical decision win over Timothy Parks (3-3, 2 KOs) in a welterweight battle. An accidental headbutt that took place in the third round eventually forced the action to be stopped at the very beginning of the fourth round. Madera won with three scores of 40-35.

Victor Torres (8-10-1, 5 KOs) of Modesto, California scored a second-round knockout victory over Israel Luna (2-2, 1 KO) of Fontana, California in a bantamweight battle initially slated for four rounds. Torres pummeled Luna easily, and due to the severity of the beatdown, the referee halted the action at 2:22 of the second round.

Super bantamweight prospect Irving Xilohua (3-0, 2 KOs) of Stockton, California scored a four-round unanimous decision against Rodolfo Medina (0-1) of Antioch, California. Xilohua managed to score an impressive knockdown in the third round, which helped him win the bout with three scores of 40-35.

Damon Cato Cain (7-0, 6 KOs) of Oakland, California defeated Christian Aguirre (8-11, 4 KOS) of Salt Lake City, Utah in a super welterweight fight originally scheduled for four rounds. Cain dominated each round, but the fight was stopped by Aguirre’s corner at the end of round two.

Arturo Cardenas (4-0-1, 4 KOs) of Riverside, California scored a stoppage victory over James Mulder (0-1) of Antioch, California in a scheduled four-rounder in the super bantamweight division. After several rounds of action, the referee deemed Mulder unable to continue at :01 of fourth round. 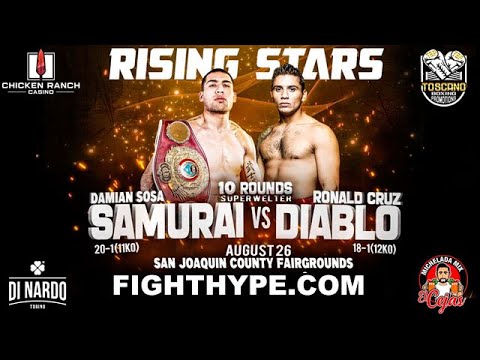 Sosa vs. Cruz was a 10-round junior middleweight fight presented by Toscano Boxing Promotions. The event took place on Friday, Aug. 26 at San Joaquin County Fairgrounds in Stockton, California. The event was streamed live in English on FightHype and in Spanish via TV Boxeo.