We are open, we are here, everyone knows our phone number. If anything happens we are ready to jump in of course, that’s a big fight. That’s why fighters train hard, work hard, have amateur and professional fights – to get a championship shot. We are ready to talk.

Frank Warren is a good friend of mine and if anything happens he knows my number and he’ll call me I think. For now nothing is fixed and we don’t have any discussion.

If both Fury and Charr want the fight, we can get a deal agreed quickly

You must know that all big heavyweights are contracted with big promoters and it’s not too easy to come together and make something happen. I will say this, if the parties come together, they’ll come together. If any parties do not want it they won’t do it.

If we have enough time to prepare everything, we are ready, but we have no discussions and I do not have contact with Frank for talks about something like this. But if he calls me because they want to change opponents we are ready and I think we get the deal done quickly.

Tyson Fury is the champion, the biggest name in boxing, and that’s why we want this fight. Manuel Charr is ready to fight the best ones. He waited a long time for Trevor Bryant and Don King [only] to get cheated by the WBA and Don King – and he has an itch [to get his shot].

Charr is suing Don King and the WBA for breach of contract and denying him a title shot.

The [the lawsuits] against Don King are going well. The WBA and Don King cheated Manuel Charr, so he sued those two. And it looks very good for Manuel Charr. I’m in contact with Manuel Charr’s lawyer who is involved in this suit and I get all the paperwork and conversations.

Charr can beat Tyson because in the heavyweight division everything is possible. Everybody said Joe Joyce was in a 50-50 fight with Joseph Parker, I said before that he would beat Daniel Dubois and knock out Parker. I say you also Joe Joyce is very dangerous for everybody [including] Tyson Fury and Usyk. Nobody should underestimate Joe Joyce, he’s a real good fighter. In the heavyweights anything is possible, Manuel Charr can beat Tyson Fury, and also get beaten by Tyson Fury – that’s heavyweights.

AJ doesn’t have the heart to beat Fury

The most important [thing] is where is your heart? In my opinion if Joshua has this heart, he can beat Usyk in the second fight, but he doesn’t have it, he doesn’t do it. He made the same mistakes in the first fight. I know Manuel Charr has a great heart, he believes in himself and he’s in really good shape.”

Eddie Hearn has my number if AJ wants a fight

We are open for everything, Eddie Hearn and Frank Warren have my number. They can call me if anything happens. We are ready. He will fight anybody. Joe Joyce or Daniel Dubois, Tyson Fury or Joshua. 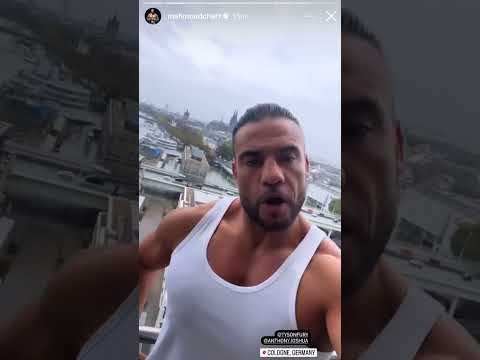 These quotes first appeared on Midnite