Former world super-middleweight champion Carl Froch has told William Hill’s Stripped Podcast that if he were return to the ring for one last fight it would be to take on Jake Paul, while adding he would face his brother Logan too.

Speaking to William Hill’s Stripped Podcast, a series in which ex-footballers and celebrities are invited to take a trip down memory lane by revisiting their favourite shirts, Froch said: “If I could have one last fight it would be Jake Paul. I’d absolutely smash him to bits, easy. 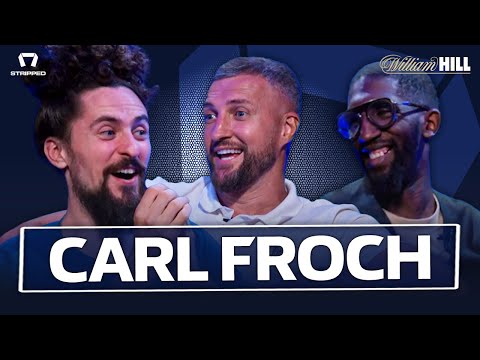 “Jake Paul can’t fight, he’s pretending, he’s conning people. He’s got his audience, I don’t begrudge him – he’s making money and doing what he’s doing. But he’s not a professional boxer. He knows not to come anywhere near me. He’s bigger than me, he’s 14 stone, he’s younger than me, he’s fresher, he thinks he can fight. I wouldn’t even train for this guy, I’d do a little bit of training. I might do the odd little run to get the heart beating, but I’d take Jake Paul to school and hammer him. He knows it, he wouldn’t fight me. No chance.”

Froch added: “I’d fight him and his brother on the same night. What they could do is take it in turns, so Jake can do round one, Logan can do round two… So they’re having a four minute breather between rounds. It’s never been done, it’s exhibition boxing. I’d take them both on.”

YouTuber Jake Paul has turned his attention to boxing in recent years and is due to take on ex-UFC star Anderson Silva on Saturday, but Froch questioned his choice of opponents.

“But he’s not stupid Jake Paul, he’s a clever guy. He’s switched on and picking his opponents wisely. He thinks he can fight, he’s talking absolute nonsense on his Instagram and YouTube channels to all his followers and got them all believing that he can fight. But he’s not fought one professional boxer because he knows to stay away from the professional sport of boxing.”

Froch’s last professional bout was in 2014 and it was his biggest as he defeated George Groves in front of 80,000 people at Wembley Stadium. Froch claims the all-British super fight opened the door for the likes of Anthony Joshua to go on and sell out stadiums.

“That fight with George Groves at Wembley set a precedent for fights moving forward,” he said. “Me and Eddie Hearn were good for each other – he was good for me because he got me back on Sky Sports, and I brought pay-per-view back. That fight with George Groves was the catalyst for what Eddie Hearn has done today, and he’ll tell you exactly the same. He worked hard and did his part, I did the fights and the winning, and beat Groves in that rematch…

“But the Anthony Joshua thing, without that Groves fight, would that have happened? Would he have had those Wembley fights? People know now that they can go to Wembley and sell it out for a boxing match. You’ve got someone like AJ fighting Wladimir Klitschko for the world title, it’s not going to be anywhere else other than Wembley  Stadium.

“So that Groves fight was definitely the catalyst for what Eddie Hearn did with Matchroom. If you’re a fighter now and you’re world champion, you’ve got an opportunity to earn some really good money, and that’s largely due to Eddie Hearn, and myself – I take credit for that and Eddie Hearn will probably acknowledge that as well.”

Froch went on to discuss Joshua further, questioning whether a lack of motivation has crept into the former world champion’s career, as it did with his own after defeating Groves at Wembley.

“When you’ve made it and you’re world champion and you’re pretty much financially secure, you start to almost question being a boxer,” he said. “I think that’s Anthony Joshua’s problem now. He got beat up by Andy Ruiz Jr and that’s mentally scarred him – he knows he can get hurt, he knows he can get stopped. But also AJ’s got to be worth £100 million, minimum. If you’ve got what you want out of life and you’ve achieved, why are you going to go back into the ring and get your head punched in? Why would you? It’s a dangerous sport.

“You have to weigh up whether the risk is worth the reward. What am I fighting for? Some more money that I don’t need and that I’ll never spend? What’s the risk? It could be goodbye. I just think when you get to a certain level in boxing and you’ve made your money, and your legacy is secure, like me when I boxed at Wembley and chinned Groves, I had nothing else left to do. You’re at the top of that mountain and all you can do is go down over the other side.”