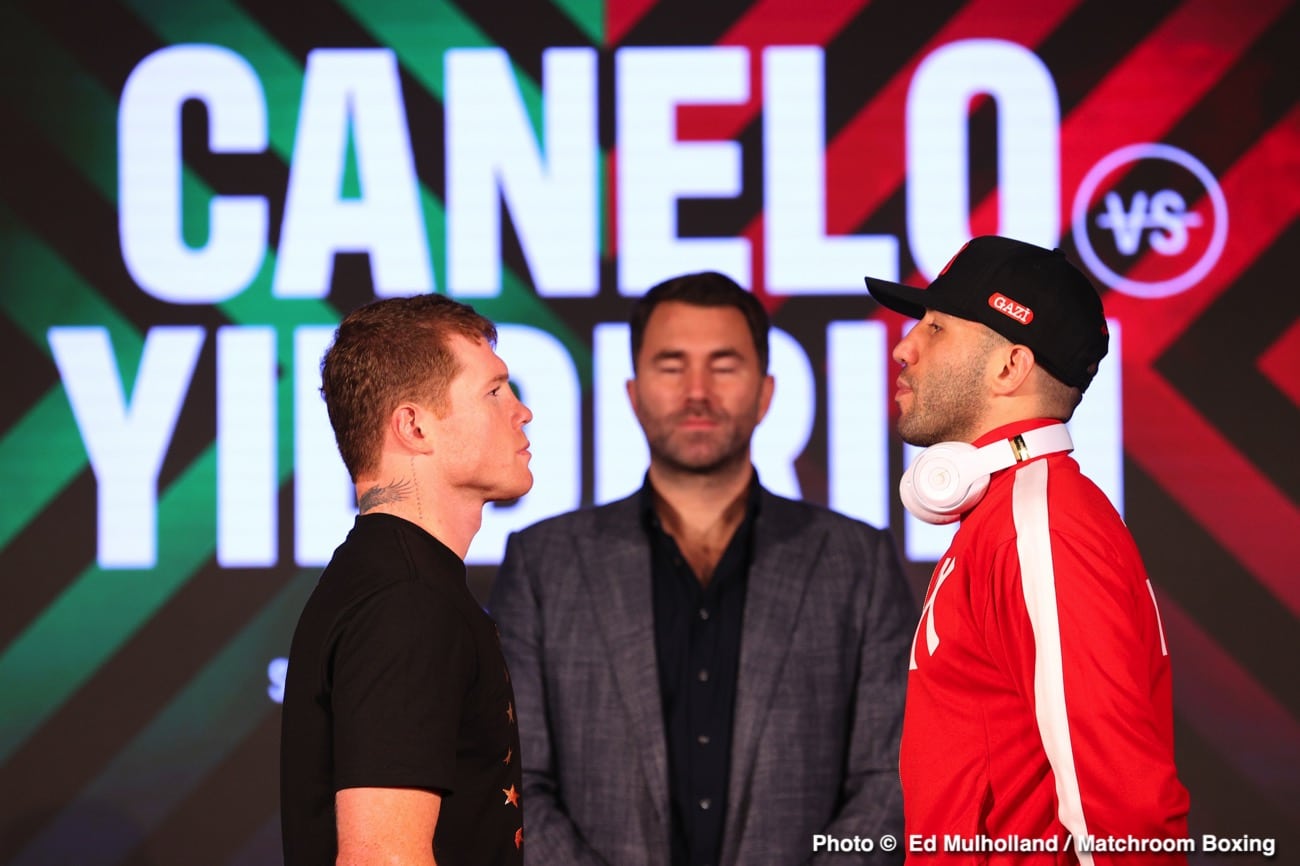 “Cannot quite believe that we are promoting an event at the home of the Miami Dolphins this Saturday– the Hard Rock Stadium. The return of the pound-for-pound king Canelo Alvarez fighting just 8 weeks after unifying the division against Callum Smith in Texas. We are so excited. We are going to have 15,000 people in the building. The huge crowd there.”

“So proud to be here representing DAZN live this weekend. It’s an absolute honor to be working with, in my opinion, the greatest network in boxing right now. These guys have so much to bring you coming up– an unrivaled schedule.”

“One thing we love at Matchroom is giving young fighters the chance to succeed.”

“You look at Canelo Alvarez, and he was just all business up there. He wasn’t really joking around. I think he knows what could lie ahead.”

“What I like about Avni Yilridim is he’s a massive underdog in this fight. But I promise he will come with fire in his belly…This is a dream come true for him. On paper, he should be outmatched, outclassed, and knocked out.”

“I’ve never seen a fighter like Canelo Alvarez upfront. What you see on Saturday is the best fighter of our generation, and it’s special to see.”

“I respect all fighters. I respect the challenger that’s in front of me right now. I know he’s a strong fighter. I know he has a lot of tools. I have the same mentality. I’m trying to do my job, and I’m trying to make history.”

“I love being here. I love being in the gym. It’s my life. We’re going to take these fights fight-by-fight, and hopefully I can fight 4 times this year.”
“I’m focused on my rival Saturday. I know right now, this fight is the only one that exists for me, and I’m focused on what I have to do, my job for Saturday.”

Jonas: Whatever version of Taylor turns up we’ll have an answer

“He’s a big champion; everyone knows that. I’m ready for the world championship title for the big chance. It’s my time. Saturday, for everyone, it’s showtime.”

“It was a great experience for me when Avni’s manager called me concerning this great opportunity. I flew into Turkey, started training over there. Everything was great; we’ve been putting in some great work. I believe we can do something with Avni. If not, I wouldn’t be here.”

“He’s hungry, he has a whole country behind him, and he wants to make a legacy of his own being the only Turkish fighter right now at this moment. He’s fighting hard, he’s excited about the opportunity, and he’s taking advantage of it.”

“Putting a plan against Canelo Alvarez, for me, is really tough because Canelo is not an easy fighter to face. Like every coach, like every fighter, we have to take risks. We’re up for the challenge.”

“We were thrilled after that fight in December and very happy after the results with Oscar Valdez. We know we have a tough fight against Yildirim; Joel trains him. We know it’s not going to be easy, but we’re gonna give a good fight.”

“I’m ready; I’m anxious. I was sad about the pandemic and having to cancel a couple of fights. I’m ready to fight whoever, whenever and I’m going in there with everything but fear.”

“I wish him luck. He’s Mexican. He’s a Mexican fighter. We want to face the best. We want to unify the title and continue gathering more titles after the result of this fight. And then possibly move up to super flyweight.”

“I just want to say thanks to everybody who comes here. Thank you, Eddie Hearn, Matchroom, and DAZN. All I want to say is I’m ready to go.”

“I go one step at a time. I never look past him. I’ll see what happens after the fight, and we’ll go from there. But right now, my focus is Saturday night.”

“I had to make sure I took the proper steps to be the best I can be in this fight. That’s what I’ve been trying to produce this entire camp. Be ready, focus, and keep my eyes on the prize.”

“He’s a great fighter. I mean, when you’re talking about Olympic fighters, this man is a good fighter. We had to come up with a game plan. We have a game plan that we plan on sticking to. When you’re fighting top guys like Zhilei Zhang, you have to be ready.”

“It’s been a hell of a start to my career so far, and I’m just happy to be here. I’m happy to step up and take it to the next level in my career.”

“I was supposed to be on the Canelo and Smith Monday card. Due to things I was going through, I was forced to pull out of the show. That was the past, and I’m here now, and I’m ready to go this Saturday.”

“It’s a good opportunity for me, but I believe that I have all the right tools to come out victorious in this one. I know he’s gonna try his best. I expect his A-game and I’m gonna bring my best A-game, so the fans can expect a great fight.”

“It’s a great opportunity to showcase my skills. Get a contract ready, man, because I’m bringing it. I know he’s a great prospect. I see a lot of similarities in our styles, and I think it’s going to be great for the fans.”

“Let’s get this party started. I’m happy to be here and feel at home right here with Matchroom and DAZN. Eddie’s doing the best, and he has Canelo. Canelo is pound-for-pound. Don’t get it twisted, anybody. I’m just happy to be a part of it.”

“I was trying to wait for the Olympics. I wanted to get this gold medal. But when this pandemic hit, things kind of changed, and things weren’t really certain for me. So coming into 2021, I realized all these big fighters had all their fights in the pandemic. I felt like if I would’ve took my opportunity to fight in 2020, my pro debut would’ve been watered down.”

“Saturday night, they should just expect a great performance. I’ve been giving yall great performances throughout my entire amateur career, whether it was sparring a big name or going internationally and fighting.”

“Miami is a huge opportunity for boxing. We have tremendous boxing fans here. Everyone comes out, shows out.”

“I can’t even explain how frustrating it is. It’s so frustrating getting to a fight. You know, you pull up with all this adrenaline just to tell you you have to go home. It’s mad frustrating, but I think those are the times it makes you appreciate moments like this. You sit up here, and you’re like, ‘Damn, this feels good.’”

“I’m very blessed to get this opportunity again thanks to Eddie Hearn, thanks to God. I was going through a whole lot of camps, and I stayed down. I kept on training. I didn’t let those hiccups pull me down.”

“My opponent seems strong, and he’s been talking a lot, so I’m really excited to put on a show. I’m sure he’s going to bring out the best of me, and that’s what we’ve been training for.”