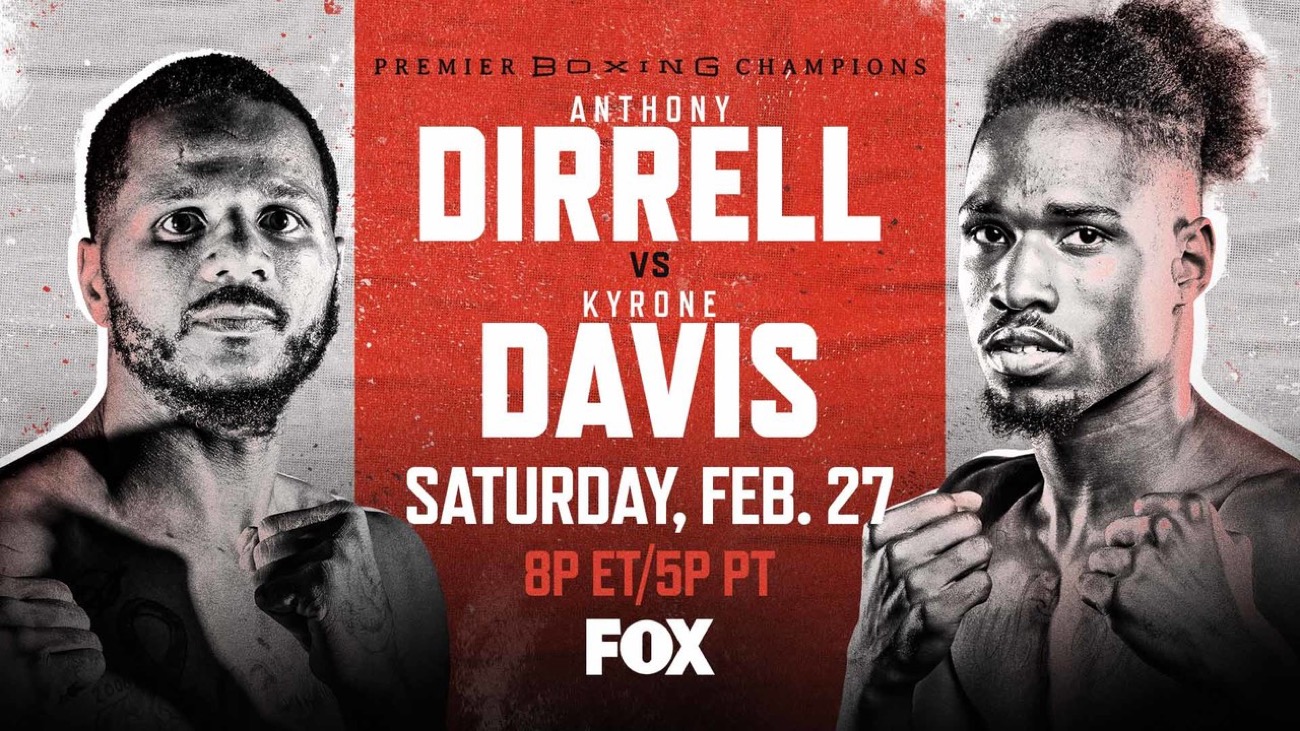 Two-time super middleweight champion Anthony “The Dog’’ Dirrell and tough contender Kyrone “Shut It Down’’ Davis battled to a hard-fought 12-round split draw in a WBC Super Middleweight title elimination match in the main event of FOX PBC Fight Night Saturday night from the Shrine Auditorium and Expo Hall in Los Angeles.

It was a tactical match as both boxers displayed superb skills, battling from a distance and in close quarters. Dirrell landed the more accurate shots, but Davis matched his work rate on offense. As the fight wore on it became a question of whether the wily veteran, Dirrell, would be able to drag the younger man, Davis, out into deep waters and sink him. Davis didn’t let that happen, making Dirrell work for everything he got in the fight.

“I thought I won the fight. I pushed the fight, hit him with cleaner punches,” Dirrell said. “He hit gloves a lot. I knew it was going to be a draw—as soon as they said it was going to be a split decision. I can’t control what the judges do and I respect them all because they have different perspectives and angles on what is happening.

“I was pressing the fight, I wasn’t tired at all. My jab was working. But I can’t stop what the judges think. Davis fought well. He did what he was supposed to, came in with a good game plan. He was boxing, he normally doesn’t do that. But we pressed the action.”

There was something extra on the line for the winner of the fight – a shot at the WBC Super Middleweight title. The 36-year-old Dirrell (33-2-2, 24 KOs), a two-time WBC 168-pound champion, had the edge in experience over the 26-year-old Davis, who was fighting for the first time at 168 pounds. The younger brother of Andre Dirrell, a bronze medalist for the 2004 U.S. Olympic boxing team, Dirrell was coming off a hard-fought loss to former champion David Benavidez. Dirrell of Flint, Michigan has cleared several hurdles in his life, including surviving cancer and a horrendous motorcycle accident. He was looking at this as his path back to the championship ranks. And he still is.

Davis (15-2-1, 6 KOs) stepped up to the biggest challenge of his career in taking on Dirrell. The most notable victory of his career had come against Marcos Hernandez in 2017. Hernandez was undefeated at the time. In the early rounds against Dirrell, Davis of Wilmington, Delaware seemed a bit hesitant, but settled in as the fight rolled to the middle rounds. He pressed the action at times, but it wasn’t enough to convince two of the judges to give him the decision.

“I thought I won the fight, 116-112. It was a great opportunity. They doubted me. They told me he was going to knock me out. This was supposed to be a showcase for him but it wasn’t,” Davis said. “My body felt well. I felt good. Anthony Dirrell is a two-time world champion. I really wanted to make a statement. A draw is not as bad as a loss but I really don’t like breaking even.

“It was my first 12-rounder so it was a little unfamiliar for me. I knew he was experienced, but I kept my composure and pushed through it. I stuck to the game plan that (trainer) Stephen “Breadman” Edwards gave me.”

In the co-feature, 19-year-old rising welterweight star Jesus Ramos (15-0, 14 KOs) looked sharp in scoring a stunning second-round KO victory over Jesús Emilio Bojórquez (24-3, 18 KOs). The precocious Ramos, the nephew of welterweight boxer Abel Ramos, landed a sharp right hook that dropped Bojórquez of Sonora, Mexico and opened a cut along his nose early in the second round. Bojórquez beat the count but was unsteady on his feet. Ramos opened up on Bojórquez as he was pinned against the ropes and referee Thomas Taylor stepped in and stopped the fight at 1:44 of the second round.

“I was surprised he got up from that right hook. I was setting it up, throwing my jab to the body,” Ramos said. “I knew he was expecting another jab but I feinted and came back with the right hook. I didn’t think he would get up but he did and then I finished the job. This was a test run [at 147]. I felt really strong, the weight cut was a lot smoother this time around. I might campaign here. I have to talk to my team and see what they think.

“I want to be a champion at 21 years of age. That would be next year. I want to step up the competition this year, fight guys with names, and next year fight guys like Yordenis Ugas.”

In the televised opener, sensational welterweight prospect Vito Mielnicki, Jr. (8-0, 5 KOs), displaying good poise, patience and power, scored an impressive KO victory over Jalisco, Mexico’s Nóe López (10-4-1, 4 KOs) when referee Gerard White stopped the contest at 2:50 of the third round. In the second, the 18-year-old Mielnicki floored López when he rolled under a lazy jab and landed a lightning quick straight right hand that dropped López on the seat of his pants.

The 34-year-old López rose at the count of six by referee Gerald White. Mielnicki of Roseland, N.J. picked up the pace and continued to pound Noe in the third round. He landed a barrage of hard punches at will that frame, forcing White to call a halt to the assault with 10 seconds remaining in the round, handing Mielnicki the stoppage victory.

“I felt strong tonight. I don’t know how long I’ll be at 147, moving up may be in my future. For this fight, I give myself an ‘A.’ I got him out of there, a guy who said was a step-up, a guy who they said would carry me into the later rounds. But I expect nothing less of myself because I know I’m going to be great,’’ Mielnicki said.

“I’m just going to keep learning. I’m still young. I’m still 18 so we’re not in a rush. We’re going to keep building and see where that takes us. I’m 8-0 with 5 knockouts and I’m not injured or anything so I’m ready to get back in the ring as soon as possible.”

The event was promoted by TGB Promotions.