Commonwealth Games bronze medallist Aaron Bowen has penned a multi-fight promotional deal with Eddie Hearn’s Matchroom Boxing and will begin life in the professional ranks campaigning at Super-Middleweight in 2023.

The popular 23-year-old from Coventry enjoyed a hugely successful amateur career, becoming a five-time national champion, picking up gold at the Commonwealth Youth Games in 2017 and winning a bronze medal in the Light-Heavyweight division at the Birmingham 2022 Commonwealth Games. 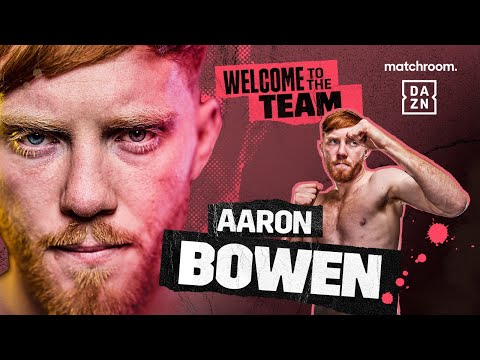 “I feel like I’ve done all I can in my amateur career,” said Bowen. “I’ve boxed all around the country and all around the world against good opposition and picked up some great experience. I just feel like now is the right time to turn professional.

“Matchroom are the biggest promotional outfit in the world at the moment. They put on the biggest shows, promote the best fighters and I feel like they can really push my career and push me to where I want to be in the future.

“I’ve boxed some good opposition, Olympians, National Champions, and I’ve sparred the likes of World Champions throughout my career. It will be a different transition but one that I’m ready for. I feel like I’ve picked up good experience to take into the pros.”

Training out of the Box Smart Elite Boxing Club in Walsall under the watchful eye of trainer Gurpreet Singh, Bowen has already amassed an impressive loyal following and the former Team GB standout believe his fan-friendly style will be well suited to the paid ranks.

“I feel I’ve got a box-fighter style; I can fight and I can box,” said Bowen. “I do like to fight, and as a pro the fans want to see fights. I can take one to give two back. That can set me up well for the pros. I’ve got 75 fights under my belt and I’ve learnt in every single one.

“I’ve got massive support. I’ve got a big following from Coventry and the Midlands area. I come to win every time and I fight to the last bell. I think the people from Coventry love that. It’s a small city and they get behind their people so it’s good signing with Eddie.

“It’s a win-win for both of us, Eddie likes big followings and my fans want to come and watch me on the big shows. I think this will be a good recipe for success. I want to have massive nights, whether it be London or Coventry. I want to sell an arena out. I want a 12-round war as well. I like fighting, so I want to give the fans what they want to see.”

“I’m incredibly excited about the signing of Aaron Bowen,” said Matchroom Sport Chairman Eddie Hearn. “I was so impressed with his performances when I watched him at the Commonwealth Games in Birmingham. You can see the entertainment and the drama that Aaron is going to bring to the pro ranks.

“I remember the huge support he had behind him and I believe that he has the potential to become a big star and a massive ticket seller in the Midlands area. His style is very easy on the eye and fans are going to love watching him fight.”